Last year, while trekking in the Himalayas I read Norman Doidge’s book The Brain’s Way of Healing, a book on neuroplasticity. It was a fitting read while being in such a spiritual place close to the Heavens. Literally, we were at above 4500 meters on the Tapovan plateau. Doidge’s book was a revelation and felt like a book of miracles even though everything was explained scientifically. In his book, there is a chapter called Rewiring a Brain with Light, that completely captured me. In it he shared the story of Dr. Fred Kahn and that is how I learned about the BioFlex Laser System.

Dr. Kahn had been born in Germany in 1929 to a Jewish family and had lived through Kristallnacht, November 9-10 of 1938, when the Nazis set Germany’s synagogues on fire and put thirty thousand Jews in concentration camps. The Kahns escaped three weeks before World War II started and they ultimately made their way to Uxbridge, Ontario, where the family began farming. Fred Kahn was raised on the farm, but ultimately left it to pursue higher education. He won a scholarship to medical school at the University of Toronto and pursued post-graduate training in general surgery. After his residency he worked as a general surgeon at a huge mining operation in northern Ontario, ultimately becoming chief surgeon. He then pursued further training in vascular surgery at Massachusetts General Hospital, and then to Texas to study with Denton Cooley at Baylor. Dr. Cooley was one of the surgeons to perform one of the first heart transplants. Dr. Kahn went on to start a practice in California. While a surgeon, he performed over twenty thousand major surgical procedures.

With such an impressive background in traditional western medicine, and especially surgery, how could a man like Dr. Kahn transition to using only lasers for the same conditions he used to treat with a scalpel?

Here is the excerpt from The Brain’s Way of Healing that made me decide to purchase a BioFlex Laser System and being using it on myself and my patients. 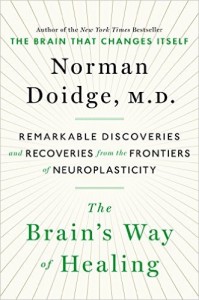 “I got into lasers, over twenty years ago because I as an avid skier and had damaged my shoulder, and it had become a chronic problem.” He had skied the great mountains, including the Alps, and got a serious rotator cuff injury. For two years it had been difficult to do any physical activity, let alone ski. Steroid injections didn’t help. “My surgeons said, ‘You are going to need surgery on that shoulder.” And I thought, ‘I am a surgeon. And I know what they are going to do to that shoulder, how they are going to cut it up, and I know the likely poor results. No thanks.’” So he suffered, until one day a chiropractor he knew said to him, “Why don’t you try my Russian laser?”

The chiropractor had an old Russian machine. It was 1986, and the Cold War was still on, but a few of these simple contraptions had made their way to the West. So Kahn let the man use the equipment on him, and in five sessions the shoulder that had been aching and stiff for two years was cured. The laser was a low-intensity laser, not the “hot” high-intensity kind that can burn through flesh.

Kahn was intrigued. When he reviewed the scientific literature, he found that these low-intensity laser treatments worked by helping the body marshal its own energy and its own cellular resources to heal itself, with no side-effects. Lasers, it seemed, could treat a number of conditions that nothing else could and could decrease the need for medication or surgery. He was so intrigued that even though he was at the top of his game as a surgeon, he gave it all up to study lights.

Low-intensity laser therapy (LLLT)—largely unknown to mainstream practitioners—is based on a scientific literature of more than four thousand publications and more than two hundred clinical trials with positive results. Most of the early studies were done in Russia or in eastern Europe—countries closer to China, Tibet, and India. Because the East was generally more interested in the role of energy in medicine, the earlier studies remained relatively unknown in the West.

Kahn told Dr. Doidge, that after the lights cured his shoulder, he reviewed all the scientific literature on lasers. He had been confused by all the many different light protocols—the different wavelengths, frequencies of treatment, and doses of light that various clinicians or companies were using for different conditions. He then spent time with the Russian scientist Tiina Karu, head of the Laboratory of Laser Biology and Medicine, at the Institute on Laser and Informatics Technologies, Russian Academy of Sciences. Karl is one of the world’s leading experts on how lasers heal tissue. In 1989, following his time with Jaru, he worked with engineers at Ryerson Polytechnical Institute in Toronto to develop and adjustable laser called the bioFlex Laser Therapy System that could produce an infinite number of light protocols and be used for both basic and clinical research. Kahn spent years trying to determine which types of light would benefit different patients, given their skin color, age, body fat composition, and kind of illness, and he developed numerous protocols for use with the equipment he developed.

When photons encounter matter, one of four things can happen. They can be reflected away from the matter, they can pass through it, they can enter it but scatter within, or they can be absorbed without dispersing a great deal. When photons are absorbed by living tissue, they trigger chemical reactions in the light sensitive molecules within. Different molecules absorb different wavelengths of light. For instance, red blood cells absorb all the nonfood wavelengths, leaving the red ones visible. In plants, green chlorophyll absorbs all the wavelengths except green.

Human beings tend to think that light-sensitive molecules exist only in the eyes, but they come in four major types: rhodopsin (in the retina, which absorbs light for vision), hemoglobin (in red blood cells), myoglobin (in muscle), and most important of all, cytochrome (in all the cells). Cytochrome is the marvel that explains how lasers can heal so many different conditions, because it converts light energy from the sun into energy for the cells. Most of the photons are absorbed by the energy powerhouses within the cells, the mitochondria.

Amazingly, our mitochondria capture energy originating 93 million miles away—the energy of the sun—and liberate it for our cells to use. Surrounded by a thin membrane, the mitochondria are stuffed with light-sensitive cytochrome. As the sun’s phonos pass through the membrane and come in contact with the cytochrome, they are absorbed and stimulate the creation of a molecule that stores energy in our cells. That molecule, called ATP (adenosine triphosphate), is like an all-purpose battery, providing energy for the cell’s work. ATP can also provide energy that can be used by the immune system and for cell repair.

Laser light triggers ATP production, which is why it can initiate and accelerate the repair and growth of healthy new cells, including those that make up cartilage (chondrocytes), bone (osteocytes), and connective tissue (fibroblasts).

Lasers of slightly different wavelengths can also increase the use of oxygen, improve blood circulation, and stimulate the growth of new blood vessels, bringing more oxygen and nutrients to the tissues-especially important for healing.

The BioFlex system uses different methods to get light into the cytochrome molecules. The first is red light, generated by 180 superluminous light-emitting diodes (LEDs). The diodes are laid out in rows and mounted on a flexible device that can contour to virtually any body part to maximize surface contact with the LEDs. In the multistage approach, first the red light is used, then the infrared light, and then the infrared laser. The red light from the LEDs penetrate one to two centimeters. The infrared light penetrates about five centimeters into the body to spread healing light even deeper. And finally, a pure beam infrared laser is used that delivers much more power than the LEDs. By the time the laser probe is applied, superficial tissues have already been saturated with so many photons from the red and infrared LEDs that the laser creates a cascade of photons that reaches as far as 22 centimeters within the body.

There is so much more beautiful information and science on lasers and how they work, and more on Doidge’s experience visiting Dr. Kahn’s clinic in Toronto. Reading his book motivated me to contact Dr. Kahn’s company and get a system for myself.

Since getting the system I have treated myself for the following conditions:

Aside from treating myself, I have used the BioFlex System to successfully treat a number of patients with various musculoskeletal conditions.